Well, folks it's true. I've left Voyager and Star Trek.
I know there's a lot of speculation out there as to the how's and why's of my departure, but I'd really rather not get into the details of what happened. (Dirty laundry and all that.) What I will say is that I realized that it was time for me to move on and that I left more out of sorrow than in anger. I have no bitter feelings over what happened and I wish everyone associated with Trek and with Voyager only the best.
I'd also like to clear up some odd rumors that have been clogging the net: I did not leave because of the supposedly negative reaction to my sole Voyager script, "Survival Instinct." In fact, the teleplay was well-received by everyone and went through a fairly modest rewrite. The same goes for "Barge of the Dead," to which I contributed only a co-story and was actually written by Bryan Fuller. I wanted to specifically put both of these rumors to rest because I think leaving a show over "bad script notes" would be incredibly unprofessional. I've
been around the block a few times and I've had more than my share of nasty notes and even had entire drafts thrown out. It's not something that would make me head for the exits even if it had occured (which it did not).
All I can tell you is that I felt that I had to leave and that it wasn't an easy decision to make. Let's leave it at that.
So my personal Trek has come to an end. It's been a helluva ride, let me tell you. I sold my first professional script to Star Trek 10 years ago next week and it's been an amazing experience ever since. I've often posted how much this show
has meant to me over the years, so I won't bore you with another nostalgic paean to all things Trek. Let me just express to you that my overwhelming feeling as I leave is one of gratitude. Gratitude for the opportunity to be a part of something that was an integral part of my childhood; for the chance to contribute to a bit of Americana; for the professional rewards that come with being part of an enormously successful series; for the education in learning my craft; for the many, many friendships that I've formed.
And gratitude to you -- the fans. You've been loyal and passionate throughout the years and I'm continually amazed by your thoughtfulness and generosity. Not fifteen minutes ago, a very special package arrived on my doorstep. Inside was a beautifully made scrapbook of thank yous and momentos from the regular users of this board. To say that I was touched would be an understatement. The fact that it arrived at this moment, after all that's happened means a great deal to me and I will treasure it always.
One last anecdote:
My last day was Thursday, July 1 and I spent most of it walking around the lot, saying good-bye to various members of the cast and crew, some of whom I'd worked with for a decade. It was a melancholy sort of task and I was eager to be done with it and get outta there. So when Bryan pulled me aside and said that my birthday gift had come in, my first reaction was to put him off for another day, but then I relented and he walked into my office with it hidden behind his back.
It was a bat'leth. A genuine, metal, leather-handled, sharp as all hell, bat'leth. Made by our prop department, which is as close as you can get to getting one from Kronos itself. I was touched and I laughed, but it wasn't until I was on my
way home that I realized what Bryan had really given me: an ending to my own Star Trek story. You see, ten years ago I walked onto the Paramount lot for the first time with a script under my arm and last week I walked off with a bat'leth. I left carrying my sword. There's a certain poetry to that and it went a long way toward making me feel as if I'd left with my head high and my "honor" intact.
Thank you, Bryan.
So that's it -- now I'm just another fan. Which is what I was at the beginning, and what I'll probably be until I shuffle off to StoVoKor (which better friggin' exist after all the time I spent talking about it.)
Take care, and I wish you all well in your personal Treks.
Ronald D. Moore 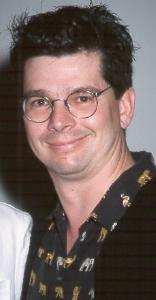